New here I need your input on found 82

So I’ve had it in my mind I wanted a Bronco for a while, not bc of the recent popularity either. I love the 95 but it’s hard to come by a good deal at the moment. I always figured one would cross my path. So today a 82 crossed my path and 1 mile from my home. It’s not for sale yet but it will be I’m sure when businesses open up. I know the lady too. Anyway the body is dentless with one fender misaligned and what looks to be a twenty year old repaint that’s pealing. Crappy plastic doors or coming apart. It’s a 4wd 302 2bbl blu silver paint code built in MI. In March . Looks like no rust at all. And the truck was probably driven there recently. How much is she worth in the market today, I need to know so I can gauge my offer. Is this a good find? (And just for the heck of it how much would one of you guys offer me). 87000 on the dash. Maybeprobably rolled over. And equipped with aftermarket tape deck and stock ac (controls are shiny) So? Is that 302 tweekable? Or keep it stock? And is it preferred over the 351? Lots of questions I know, but hey maybe you can assign yourself one? Cheers. (One more) I have the means to fix her up, should I or should I flip her bc more value is in a unmolested truck, and look for a 95? 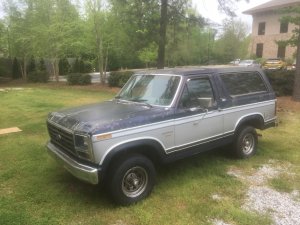 Jazz577 said:
How much is she worth in the market today, I need to know so I can gauge my offer. Is this a good find?
Click to expand...

You can tweek a carb engine all day long, Most people pull off the 2bbl and put on a 4bbl.

Most people like the 351 but the 302 is a smoother rev happy engine.


Jazz577 said:
I have the means to fix her up, should I or should I flip her bc more value is in a unmolested truck, and look for a 95?
Click to expand...

All up to you what style of Bronco you want in your stable.

That Bronco is identical to the '83 XLT I bought new, including the color and the eventual peeling of the clear coat. That ain't a cheap paint job unless you count FoMoCo. Mine had the same problem exactly that forced me to paint the whole truck a dark metallic blue (because the argent side panels would have been extra cost). Ford actually issued a recall for the clear coat on that dark blue color. If I'd only known. My old Bull Nose had 177K miles on the clock when I sold it in 2000. It was knocking down about 7 mpg but still ran smooth as can be. It was a 302 w/ carburetor. I missed that thing so much that I went out and bought a '95 XLT about two and a half years ago. The things I didn't like about the '83 was the 302 (a little puny for that big a vehicle), lack of power windows, lack of a rear window defogger, the carburetor and the three speed C6 transmission. My '95 has a 351W, power windows, a rear window defogger, fuel injection and a 4 speed tranny. The 351 has gobs more power than the 302 did in my recollection.
J

Thanks for all the input guys. I’m really growing fond of it every time I look at it. There is a really solid chance I’ll be able to scoop it for a thousand give or take 300. Seriously. Hoping so. Now time to convince pops it’s a worthy truck to take up space and work on. So one thing i noticed was upon closing the door it fealt really light cheap hollow and Clangy Like it didn’t fit snug. What this the way it was or are there thing you can do to make her shut tight and stronger like a 90s bronco. I alwAys judge cars on how the doors close. Don’t know why. Also that 302 is I wimp I suppose compared to a 95 302. What kinda money or effort would be involved yo make her fule injected HO 302. I mean are there kits and sources, is this something regularly done, or is it more practical to just do a full motor trans computer swap from a 90s truck thanks again
You must log in or register to reply here.
Share:
Facebook Twitter Reddit Pinterest Tumblr WhatsApp Email Link