We just got our first Bronco - a 91 EB edition with 5.0 and E40D. 98000 winter-free miles. Previous owner installed an E303 cam and put on headers with a Borla exhaust, but otherwise stock. So it idles poorly - going to have to either pull cam or do a MAF swap on it. Looking forward to learning more about this truck and getting it all cleaned up for bringing to car shows and driving daily! 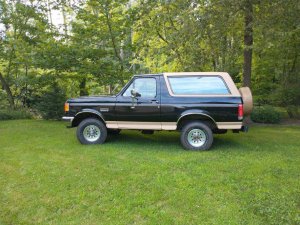 Yo pltommyo,
Welcome!
Your 91 appears as new. Soon, address the rust at bottom of B pillar(s). See Rust in gutters and B pillars by jermil01 @ https://www.fullsizebronco.com/threads/rust-in-gutters-and-b-pillars.210693/

Here is the 1990 F Series/Bronco Pre-Delivery Shop & Electrical & Vacuum Troubleshooting Manual (EVTM), Partial by Kingfish999 in Google Drive (similar to your 91) @ 1990 Ford Truck service manuals - Google Drive
Slow scrolling for my slow Comcast Highest Cost Blast Internet..
Suggest you download the docs for faster scrolling and to use the page index.
Note that it includes some info for E4OD automatic transmission.

1991 Bronco Dealer Brochure by Ford via via Dezo's Garage @

Did the MAF swap on my '91 Bco. Works great even after sitting for weeks.
5-Oh has amazing customer support.

Skitter302 said:
Did the MAF swap on my '91 Bco. Works great even after sitting for weeks.
5-Oh has amazing customer support.

Thank you. Did you do the air pump and TAD/TAP delete?

Yo,
Following emission parts are commonly used & available via google searches:
You are looking for Thermactor Plugs, some use 5/8" by 11 by 1" SS bolts while others have welded holes closed.
Stainless Steel Thermactor Smog Plugs the holes in the back of your cylinder heads when removing the exhaust crossover tube. Comes with 2 stainless plugs and Loctite. Hex head makes installation easy when the engine is still in the vehicle.

by Ryan M.
¤
Thermactor Smog Plugs, EGR Eliminator Overview, EGR Block Off Plate, EVR, CANP, TAB & TAD Actuator Eliminator Resistor & Parts List & pics; need one 75 ohm 3 watt Resistor for each item removed, EVR, CANP, TAB & TAD solenoids
by Ryan M. But company is out of business.
https://redirect.viglink.com/?format=go&jsonp=vglnk_153823094736314&key=6ed47b392b9edfe394b9e89b72717104&libId=jmniwamh01000bgv000MA1omel57xq17et&loc=https://www.fullsizebronco.com/forum/21-noobie-bronco-tech-questions-flame-free-zone/435826-vacuum-delete.html#post6207818&v=1&out=http://web.archive.org/web/20120820002649/http://www.rjminjectiontech.com/collections/egr-eliminators&title=Vacuum delete - Ford Bronco Forum&txt=http://web.archive.org/web/201208200...gr-eliminators
"...What you need to do is electrically plug in the TAB and TAD solenoids but remove the vacuum lines, then all the air injection plumbing and valves can be removed and the heads plugged. The EGR is a seperate system from the Thermactor and the computer treats it very differently, it also helps increase milage and power so it's a good idea to keep it anyway. If you have the DPFE system there is no way to bypass it without the computer knowing and throwing a code so you may as well keep it intact. you'll get codes if you remove the solenoids, the easiest way to avoid this is to just leave them plugged in. The TAB and TAD you could fake out pretty easy, but even the old EGR system can't be faked because the computer both commands valve movement and watches for feedback to confirm it happened, so a dummy resistor won't cut it.
Source: by Conanski
¤
A neat mod by jrichker; "...Put the resistor inside the heat shrink tubing and crimp the connectors on. I would choose the Ford pin connectors since they should plug in the TAB & TAD wiring. That way you haven't modified the wiring so it is easy to re-install the TAB & TAD solenoids if emissions testing comes to your area. 18 gauge crimp on taps..."
read more and see many pics.
at Are the TAD/TAB vacuum solenoids NEEDED?
¤
EGR Eliminator Installation Manual by Ryan M. @ Wayback Machine

¤
EGR Do it yourself MIL Eliminator by TrimDip @ Ford Mustang Forums

"And, I did find this, "here's an even easier way; once the EGR valve is removed off the car, remove 3 small (7mm?) screws to disassemble the pintle assembly (EVP) from the EGR valve body. plug the EVP back into the wiring harness and push the steel pintle in about halfway and using strong tape (green or red duct tape works best), wrap the tape over the pintle so that it holds its halfway-in position. hide the pintle assembly out of sight. I've run my car like this for at least 5 months now and no check engine light. No soldering needed, no money spent except if you need to buy tape and its still safe and reliable. just remember to put an EGR delete plate over the opening in the upper intake, a cap over the heater tube opening on the passenger side header and plug off your 2 or 3 (now disconnected) vacuum lines." by cobraman1024 @ Ford Mustang Forums

Nice clean looking truck.
Pressure wash the bottom really well, as in put on a rain coat and get on a creeper and get under there. Blow the loose stuff off and start covering everything with rust converters and undercoating to try and save what is left. Totally worth it.

pltommyo said:
Thank you. Did you do the air pump and TAD/TAP delete?
Click to expand...