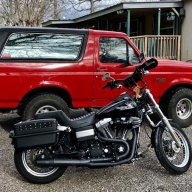 I had her scheduled for an E40D rebuild the first week in March, 82 year old mother fell Trama Surgeon Required broken her arm, 2 week after release to rehab, returned to learn she had blood clots in her lungs and a 2” spot on her left lung. Been using her Kia Serento as it’s almost a daily trip previously to the hospital or rehab and now to her home. Anyway I think she’s unhappy I drove her some and she puked out a bunch of trans fluid. First gear sound metallic, so starting in second and then the IRS wanted money as I forgot to pay for when I had my knee done, so now not enough money for the trans again. I had just put that new throttle body on her too. So that why I’ve been inactive

Mom come,s first. I hope she has a speedy recover very soon. Lookup. Prayers for your mom and your family.
You must log in or register to reply here.

New Member With An Old Bronco