Okay. A little background information. The truck has been running rough and the OD light was flashing. It had a transmission leak so I figured it was all related.

I got the transmission rebuilt last week. Still running rough, still OD light flashing. He told me he thought my computer might be bad because of how many codes he was pulling.

I did some research and replaced the TPS sensor hoping this would clear some issues up. No luck.

So, today I pull the codes myself and it is all over the place. I am getting three digit codes that start with a 6 and from what I can find, that can’t be right.

Before the codes start blinking, I get a very strange blink that look like it is a bunch of rapid blinks or a blink with low power. Then the codes go.

These are all the KOEO codes in order:

I have triple checked the codes. Please help!

Too many codes to be a mechanical problem. Pull the PCM out and look for burns on the board.
T

Skitter302 said:
Too many codes to be a mechanical problem. Pull the PCM out and look for burns on the board.
Click to expand...

This is what the inside looks like. There is only one spot that looks burnt to me. 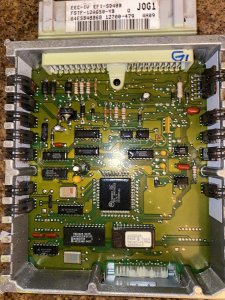 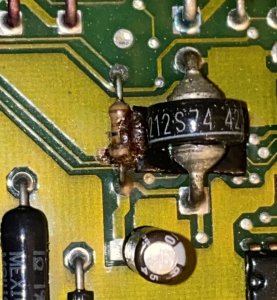 Yes you need an ECM. At least looks like it to me.

Yo TC,
G7 Computers @ How Does This Work?
Bronco owner jermil01 wrote, "I've used G7 in the past..good company and responsive. If your EEC has a faulty capacitor or resistor as is the case with most of them it's usually fixable as long as the board isn't damaged, but they need to have to be able to determine that. A while back I had a spare EEC I was going to send to them to have checked out, before I did, I snapped a pic of the board it had scorch mark. They said not to bother that the board was probably shot.."
Member gedebohls wrote, " i went with sending my ecu to G7 computers in Canandaigua, NY, the reason i went this way is because i send them my unit, i get my unit checked out 100% and they will then fix as needed. I like this bc I will know for sure if my ECU is or was bad, etc, and I get my ECU back fixed. the cost is $225 plus shipping one way, if nothing is wrong with my ECU i get 100% refund. Once i get my ECU back or get an update from G7 I will update."
Update; "I sent the EEC to be rebuilt by G7 computer and they quickly sent the EEC back saying they replaced a faulty resistor. When the EEC came back I still had the same issues with the bronco , and we spent a lot of time re testing and checking things to only determine that the only possible issue was a bad EEC, so back to G7 Computer. This time they determined a faulty Main processing chip, and stated that the damage was too extensive to replace the main chip, I get it; it is a computer sometimes it is hard to pin point an issue when it is intermittent. My question is; is it just not cost smart for a company like G7 to not want to replace the main chip, or can you just not replace the main chip? So in short G7 sent the EEC back to me and will credit $225 of the $250 saying they get a diagnostic fee of $25, which I also get , "Well sort of get". "
@ A 94 with a Gremlin
○
A long time Ford mechanic wrote, "The main causes of failure is water in the PCM plug or cap failure inside of the PCM. Make sure you have enough Di-Electric Grease in the plug to waterproof it."
○
Ryan M wrote in his "install a chip" article @ Fuel Injection Technical Library » install a chip
"DO NOT USE EXCESSIVE TAPE TO SEAL THE COMPUTER. TOO MUCH TAPE WILL CAUSE THE COMPTUER TO OVERHEAT!" The tape and a piece of foam was to be places around the chip J3 port, but can be applied to the case itself.
○
I recall that someone here that their PCM died due to a bad weatherstrip. No further details were provided.
○
In an old ford truck forum that is now off line. "The water leakage may be due to the PCM connector cover not seating completely and water leaking down from the cowl panel grille (cowl top vent panel) area."
Check Hood Cowl Rubber seal. See Cowl Seal - ???Gary's Garagemahal by Gary and @ oncograveyard.com/1987-1997-Ford-Bronco-and-F-Series-Truck-Hood-Cowl-Rubber/productinfo/36004A/

I can see 2 burn spots clear as day. Bummer.
Local auto parts store should be-able to order you a new one. They will need your vin

Agreed. New one, or rebuilt one. That's what yo need to do.
T

Okay, I have ordered a new one.
If there is something to have caused the old one to burn, will the same thing happen when the new one is installed?

Looks like age and one of the caps leak'd out.

I wouldn't worry about the vehicle wiring as a cause of the issue.

Yep,
I see two leaky capacitors plus the burn spots which are probably the results of bad caps.
T

New PCM is in and it is running like a champ now. Thanks for your help!
T

I don't if this needs to be a new thread or not.

So, it does run great. I have driven it to work and around town and there has been no problems. Until yesterday when I went on the freeway going about 65mph max for 5 minutes. No problem on the freeway. Then as I get back to regular roads it starts to idle rough at stoplights/redlights.

In park it was idling fine. When I shift into reverse it is rough and when I shift into drive it completely dies immediately. I took the negative off the battery for about ten minutes. Now it is back to how it was running before I went on the freeway. Drove fine all morning, got up to about 45mph max. Still no problem. What would have caused this? I am avoiding the freeway for now.

Yo T,
E4OD Transmission Control Indicator Light (TCIL) is a LED and overdrive on/off switch at end of the Transmission shifter stalk; flashing OD light is an indication of a transmission related trouble code in the Powertrain Control Module (PCM).
Is it flashing while driving?

Try a Self Test for Diagnostic Trouble Codes (DTC)s by my pal, BroncoJoe19 @ Code Reader
T

It was flashing before the PCM was replaced. Now it hasn’t at all.

TChrobo said:
It was flashing before the PCM was replaced. Now it hasn’t at all.
Click to expand...

Yo T,
Ok, do the Self Test for Diagnostic Trouble Codes (DTC)s by my pal, BroncoJoe19 @ Code Reader
T

My check engine light isn’t on. That means it won’t give me codes right?

TChrobo said:
My check engine light isn’t on. That means it won’t give me codes right?
Click to expand...

Yo TC,
No.
The Key On Engine Off and Engine Running Self-Tests are functional tests which only detect faults present at the time of the Self-Test.