I have a 95 xlt sport with a 89's non roller block, re dressed with the 95's intake, timing cover, valve covers and oil pan (covers and pan were in better condition), its a manual with a zf5 (originally had a m5od until it was stolen and returned with no 1st or 2nd gear) . The truck runs speed density, i want to change it over to maf, the only problem is that all the info i can find is either for 5.8's or for automatic's, have been searching for weeks but unsure how relative the info i can find is when its all for different setups. Any help would be much appreciated, thanks in advance

Speed Density to Mass Air Conversion for EFI in an 88 5.0 F 150
Source: by Bjorn B print this too

peed Density to Mass Air Conversion for Bronco & F 150; "...To convert SD trucks with E4OD/AODE transmissions to MAF, some people use the CA 5.8 MAF/E4OD (F5TF-12A650-BYA). Mike Wesley says he uses the F5TF-12A650-HB (95 CA 5.0 MAF/E4OD) on a 750+ HP daily driver 415 stroker Lightning with a Vortech S trim. It runs open loop, has been reprogrammed, drives like stock, gets 17 MPG and will run low 10’s at 130+ in the 1/4 mile and A/C and cruise work great. Both of these EEC’s are set to use 4.10 gears. If a smaller ratio is used, say 3.55, you could use the F5TF-12A650-GB. There are probably 15-20 EEC’s available to convert a SD (later model) to MAF (some of these may compromise the ability to stay emissions legal). If you have an early SD truck with AOD, re-wire to the Mustang EEC (Ford MotorSport sells this kit). You’ll have to move/add quite a few wires, and you might not like the results if you’re not able to re-calibrate the EEC (like the Pro-M ’low cost’ kit, Kenne Bell, LCA and Downs Ford come pre-re-calibrated). The engine shuts down at 85 MPH, shifting is fairly sloppy and too early (at least on a Lightning). All Ford EECs shift poorly -- except for the Lightning, which is only slightly firmer. To use the Mustang EEC on a truck with an E4OD/AODE, you would need to run two EECs in parallel. The Mustang EEC runs the engine, the existing truck EEC controls the trans. Pro-M sells a kit like this..." READ MUCH MORE
Source: by Tom C via Ryan M (Fireguy50)

So from what info ive gotten from the links above the A9L is the pcm i want, and itll require either re-pining the current harness or getting a compatible harness,.

I was reading somewhere that the A9L didnt have a knock, boo, or a power steering switch input, can anyone verify??

See what I posted in my previous reply @
http://blogarchive.brembs.net/cars/maf_conversion/

EXCERPTS:
"...I also got a wiring harness off of a 1989 truck, a computer connector and the A9L computer from a 89-93 Mustang. The idea was to take the intake off the truck, remove the engine wiring harness and replace it with the parts from the project to have a MAF truck with a single intake tube and a performance mass-air sensor.
The most tedious job is to make the wiring harness. First I had to strip the entire harness from the 1989 F150, clean it and make sure all the connectors matched. In addition to the sequential injector wiring, the connector for the mass air flow (MAF) sensor needs to be wired into the harness. I simply split the signal of the single oxygen sensor in two to simulate two sensors as required by the A9L computer.

To get this done, I first had to take off all the wire stumps from the spare connector that came with the A9L:

That is rather easy, if you take out the red H-shaped bracket and then insert a small screwdriver (see Leatherman Wave above) into each pin to remove it. I'll re-use some of the pins later!

The extra connector came in handy, because the old connector had a plastic cover that would've needed modification to move pin locations and it provided me with spare metal inserts for the pins. All I had to do was switch all the pins over to the new connector. The left picture shows the beginning of the process with only a few wires in the new connector. The right image shows the final result: all the wires are transferred and the remaining parts are combined to another spare connector (on the right side, with the H-bracket inserted and the black cap over the blue plastic cover).

During the soldering and wiring process, I double checked all the connections with the wiring diagram of a 1990 Mustang. You can see my printout of the diagram on the left image above. Note that the injectors will be wired slightly differently, as the firing order for a Mustang is different from that of the truck (see above).

During the wiring of the wiring harness, I discovered that pins 23 (knock sensor) and 24 (power steering pressure switch) are not used in the Mustang A9L. For now, I have left those pins unoccupied. If the Mustang doesn't use them, it should work with the truck, too. It simply means I might have to depress the accelerator somewhat to turn the steering wheel when the truck isn't rolling and I can't advance the timing too much, if there's no knock sensor automatically retarding the timing. We will see how this turns out. I also moved the air charge temperature (ACT) sensor from the lower intake manifold to the intake tube.

This is what the harness looks like in its final form with the A9L Mustang computer:..."

I run my Bronco on the fiveologyracing MAF kit. Works good.

Update: i am gathering parts to do this but just got laid off so its on the backburner until i get employment again

Dang that sucks yo. Might be better to work on that project later anyway given the current climate. Do keep us posted.

Update: while trying to get a new tailgate for my 95, i came across a 96 xlt that had been rolled, its a 5.0l 5spd obd2 with maf, suprisingly clean tailgate, but the cab was trashed, the guy wouldn't part it out, but i really wanted the tailgate, so i bought the truck and drove it home with no windshield, it ran really smooth no check engine light, it drives straight doesn't wander or brake to one side.

The plan: swap my broken 95 dash out for the 96 dash, obd2 swap,
rotten 95 tailgate swapped for clean rust free 96 tailgate

Question: do i need to pull the door harnesses from the 96 or is that the same? 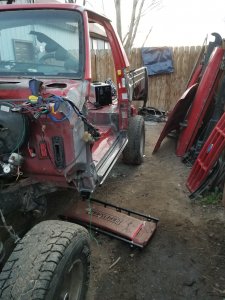 Wht/gold is the 96
Red/gray is the 95 thats been under the knife for rust repair since getting laid off, 90% of the parts ive had for over 2 years in my garage, when i got laid off it became the perfect opportunity to get the truck done, already have a job lined up but doesnt start for a while so i have a time frame to get this done in

Thank you so much for the help

Just noticed that the 96 doesn't have rke, how hard would it be to retain my rke currently in the 95?

So i came across this link this morning and want to confirm that itd be easier to just get a universal remote entry.

I do have the rke from the 95 though.

Awesome thank you so much for your help

So i ran into another question last night,
We were cleaning up the engine going into my bronco and the casting # was f1se-bb its a roller block for sure, not sure if its original, i thought it being a 96 itd be f4te for sure?

Yo XLT,
"...
You can confirm whether you have a roller block by simply looking at the block part number to see if it is an F4TE Block. This will be located on the passenger side, above the starter and immediately adjacent to the Oil Pan. You will probably need to clean the area and use a flashlight. If you find an OEM F4TE Block, it would indeed be Roller Ready.


For more information, see the below links:

Are You Non-Roller or Roller Ready?

Bronco EFI and Camshaft Historical Information, for your reference... "
by Seattle FSB